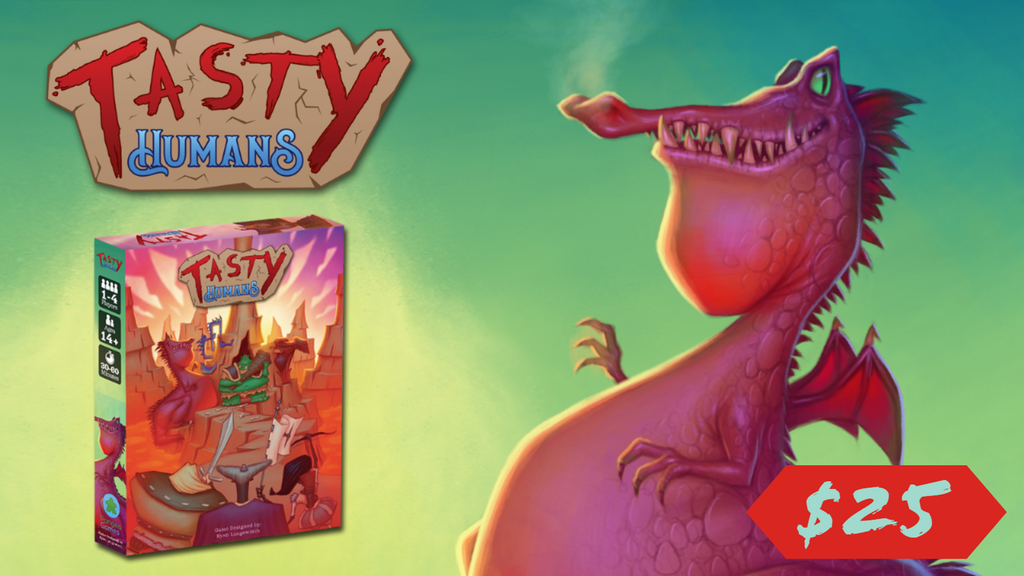 Become a monster. Eat villagers. A puzzle-solving, tile placement board game for 1-4 players. Take turns selecting which adventurers to consume, dropping various body parts into your stomach. Once you or another monster fills their stomach, the most satisfied monster wins!

Latest Updates from Our Project:

At 11:34 PM EST on the fifth day of the campaign, Tasty Humans funded. It seems poetic that our game, which at least a few people have called a "sleeper hit" was funded by a midnight snack. Thank goodness, too, because I was caught in an endless loop of refreshing while the campaign stood at $7,990.

We've said it before and it bears repeating: thank you! We could not have done this without your support.


Stretching to Make Room for More

Now that the game is funded, we're not just going to deliver it to you. We're going to consciously improve everything about this game as soon as our budget allows. Indeed, on the campaign page today, you'll see two new stretch goals.

Early on, our play-testers expressed a hunger for better components and more monsters. As it turns out, we can add these to the game pretty cost-effectively. We just need your help!

Everything we want to add is play-tested and ready to go. The only constraint are per-unit manufacturing costs, which drop as more units are produced. (Cooking for 16 is not much harder than cooking for 8.)

Tasty Humans designer, Ryan Langewisch, just put together a new video showing how the Tasty Humans solo mode works. He put an enormous amount of thought into the solo mode of this game, so check it out if you'd like to see it in action.

In other news, I'll be recording with We're Not Wizards, whose podcast is delightful. It's very likely that you'll see it in your podcast feed right before the conclusion of this campaign on July 23.


It Only Gets Better from Here - Tell Your Friends

Now that the campaign is funded, we're going to be focusing aggressively on giving you more game for your money. This game is no longer a "maybe" but a "definitely" since we've crossed our funding goal. If you have any friends on the fence about backing Tasty Humans, let them know how things are going. (But as always, be tasteful in your advertising!)


Thanks again for backing! We can't wait to serve this game to you!

Sometime last night, we blew past both the $10,000 mark and the 400 backer mark. We're really cooking now! (And the smoke detector hasn't even gone off, which is a first.)

The observant email subject line reader that you are, you probably know what that means: we've unlocked our first stretch goal! Gone are the days where a cheap plastic piece denotes who is player 1 in any given round. Now, we're including a custom wooden piece right in the box.

The only thing we crave more than humans at Pangea is attention. For that reason, we're doing our best to stay in the media. One of the highlights of our last week was seeing Garry Rice's giant print-and-play version of Tasty Humans pop up on Board Game Geek.

We've also recorded shows with We're Not Wizards, Blue Peg Pink Peg, Board Game Revolution, and Indie Board Game Designers. If you're already a fan of these media outlets, keep an eye out for us! If not, check them out - they're all really good.


Coming Back for Seconds and Thirds (on Stretch Goals)

We know that custom wooden token won't hold you over forever. We know you're hungry for more. That's why we're going to reveal our second and our third stretch goals right now.

Your eyes do not deceive you! If we raise $5,000 dollars, we can afford to double the amount of monster options in the game. We can print on both sides of each board, instead of just one.

So what monsters are we including? Well, we're looking at a Giant Slime, a Werewolf, and...

Huh, somebody took a bite mark out of the rest of the page. I'll have to ask Tyson and Ryan what the other two are. It'll probably take me $2,500 worth of time to figure it out, though.

As always, Kickstarters thrive on word-of-mouth. If there is anyone you know who would love this game, tell them about it!

Thank you so much for backing and supporting the campaign!

For those of you who enjoy watching games live, we're going to be streaming with Vorpal Board this Friday at 9 pm eastern.

Curious about the game design decisions? Get inside Ryan's head with our recent appearances on Board Game Design Lab's fantastic podcast and your humble narrator's blog.

Logan Chops just came out with a brand new preview, which you can find on YouTube! Ding & Dent is going to feature us later today as well.


We Hope You Saved Room for More

We don't want to give away too much yet, but a lot of the things you've said are things we've said as well.  We wish there were more monsters. We would love if we could afford that next step up in components. Suffice it to say, every extra dollar after the goal is met will add a little more spice and garnish to this succulent dish for 1-4 (or more).


Tell the Village the Monsters are Coming

Again, thank you so much for backing early! We're looking forward to a long, satisfying meal.